The goal of the Opa-Locka CRA is to create and implement strategies that use a combination of public and private resources to facilitate redevelopment that enhances the built environment and strengthens local economic conditions within each redevelopment district. To meet this goal the Opa-Locka CRA seeks projects that help reduce or eliminate the continuation and/or spread of blight. Individual projects and policies are supported based on the specific conditions and needs identified within the Opa-Locka Redevelopment Plan. Areas where the Opa-Locka CRA concentrates redevelopment efforts includes, but is not limited to commercial development, mixed-use development, neighborhood and housing development and improvements (with a focus on affordable housing), infrastructure, transportation, and support for  promotional and special events. Funds are provided through grants and/or loans based on the funding gap of the proposed project, the projected Return on Investment and the community benefit.

Under Florida law (Chapter 163, Part III), local governments are able to designate areas as Community Redevelopment Areas when certain conditions exist. Since all the monies used in financing CRA activities are locally generated, CRA’s are not overseen by the State, but redevelopment plans must be consistent with local government comprehensive plans.

The boundaries of CRA are generally bounded on the north by NW 151st Street, on the west by the Opa-locka Executive Airport, on the south by the Tri-Rail/CSX railroad corridor, and on the east by a freshwater lake managed by the South Florida Water Management District. The 514-acre CRA will cover approximately 18 percent of the City’s total area. The CRA’s boundary was finalized according to important considerations involving zoning, land use, and redevelopment opportunity. The CRA contains a range of geographically distinct land uses. In effect, it may be seen as a group of five primary districts: 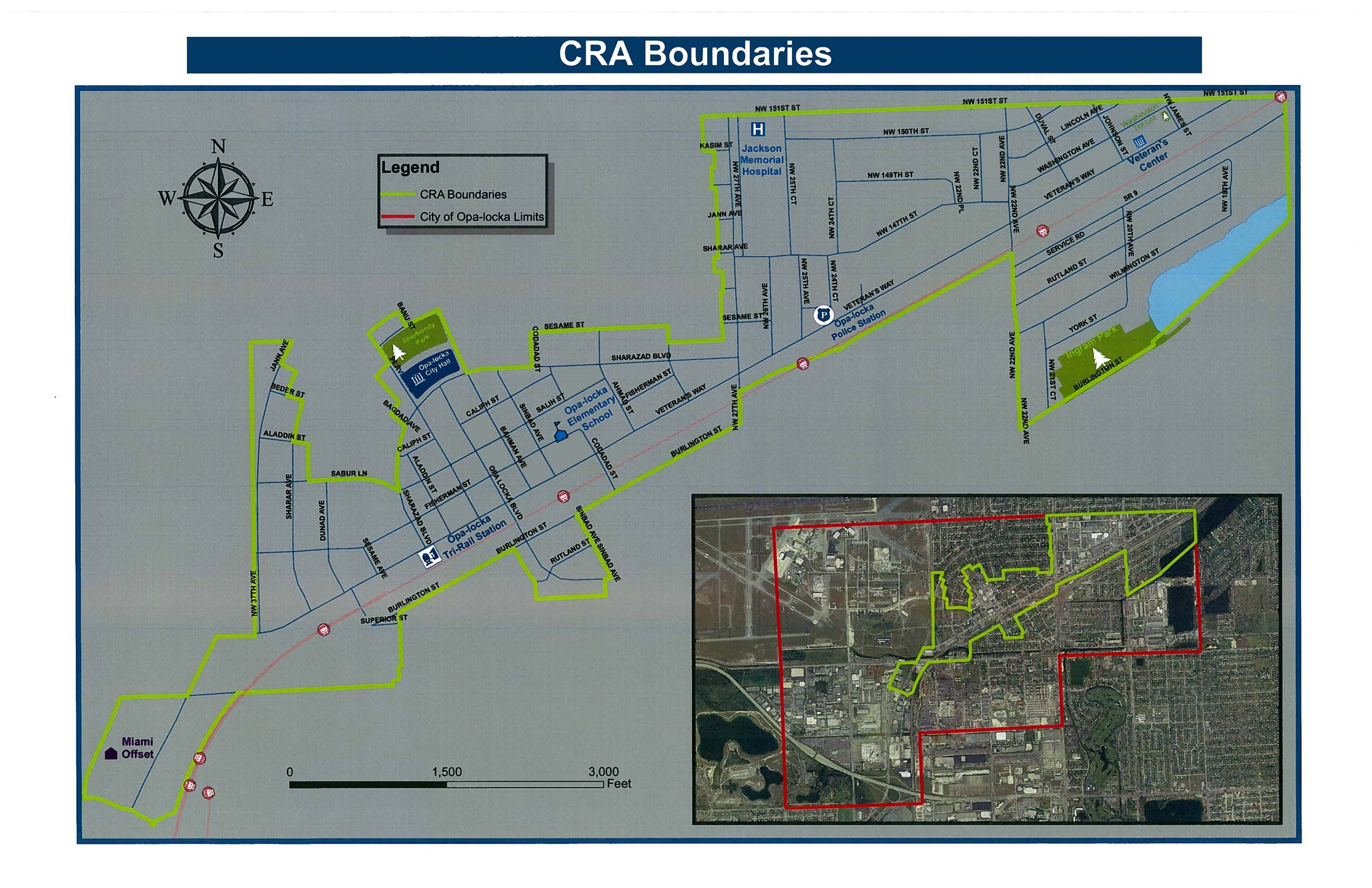 OCRA Board of Directors

The City of Opa-locka Community Redevelopment Agency Board is composed of seven board members, the five members of the Opa-locka City Commission and two appointees from the Board of County Commissioners of Miami Dade County, one appointee from District 1 and District 2. Their term on the Board of Directors is equal to their term in office as a Opa-locka City official, or appointees are based on their appointment/reappointment by County Commissioner’s subject to their term in office. The OCRA Board is under the leadership of Chairperson Jannie Russell-Appointee for District 1. The OCRA Board members are: